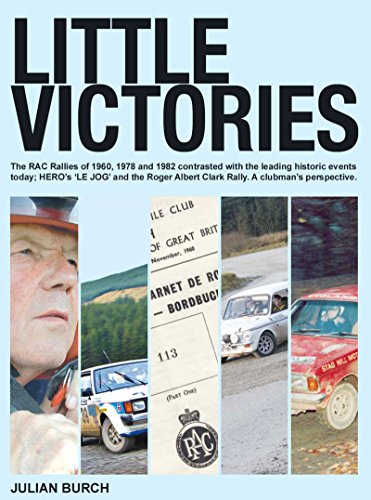 Just how well do today’s historic rally events compare with the great RAC rallies of the past?
Taking three period reports of his Father’s RAC rally exploits in 1960, 1978 and 1982, Julian has contrasted his own experiences of their modern day equivalents; HERO’s LE JOG and the Roger Albert Clark rally. ‘Little Victories’ recounts competing at a clubman level in the context of each event as a whole, and the changing face of rallying in general.

“It’s a great read that shows the evolution of rallying. Julian has given a comparison of three different eras of the RAC Rally, starting with being thrown around three in a car over routes from Blackpool to Lochinver and back to Brand’s Hatch. What you didn’t have in BHP you certainly needed in stamina back then.”
- From the Foreword by Graham Walker and Louise Aitken-Walker, MBE

“Paul and Julian Burch’s experiences whilst taking part in major rallies spanning 52 years combine to make a fascinating and enjoyable read. Clubmen competitors taking on the greats, away from the limelight.”
- Simon Marks, 2007 to 2012 MSA British Historic Rally Championship Co-ordinator

“1960 was my second RAC - in a Sunbeam Rapier. It was on that rally that I first met Andrew Cowan who was also competing in a Rapier. Three years later I was partnering him on his very first rally abroad, the Tulip... Happy memories. Your book looks good and I wish you every success with it.”
- Johnston Syer, Former International Co-driver