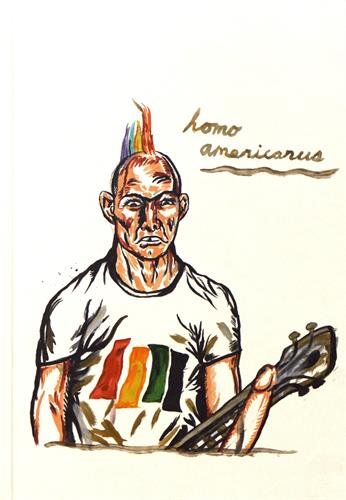 Philosophically profound, deeply literary and biting in his satire, Raymond Pettibon is the foremost draftsman of his generation, and one of America's most important contemporary artists. Approaching "high" and "low" subject matter with equal appetite and comfort, Pettibon plumbs the depths of American sexuality, politics, subcultures, mores, and intellectual histories through themes ranging from Shakespeare to Gumby, surfers to the Bible, baseball to German Romanticism. Published on the occasion of his major European traveling retrospective at the Deichtorhallen Hamburg - Sammlung Falckenberg, Raymond Pettibon: Homo Americanus presents over six hundred works from every part of the artist's career, the majority of which have never been shown before. Arranged thematically in thirty-two chapters, this unique catalogue charts the appearance and development of the themes that have come to define Pettibon's expansive oeuvre. Different sections are introduced with excerpts from interviews conducted with the artist. Beyond shedding valuable light on the genesis and cross - pollination of Pettibon's thematic interests, this catalogue is the first to tackle the artist's work as a whole - as a kind of hive mind of American culture whose various branches constantly address and reinterpret one another. Of particular interest are Pettibon's own readings of individual works in the book. In excerpts paired with corresponding images, Pettibon guides readers through his complex, often meandering turns of thought; never condescending, they invite readers to enter more deeply into his thinking without sacrificing the intellectual rigor and sense of mystery that makes Pettibon's work so compelling and challenging. The book includes a complete facsimile of his first artists' book, Captive Chains - almost entirely unavailable for decades - in addition to numerous early drawings completed with his nephew, record covers, flyers, and sections dedicated to collages and drawings from the 1

Review
Every so often, a fresh monograph comes out on a well-known, even rock star-status artist. And that artist's fans and collectors purchase the new book, de rigueur, in much the same way that an avid music fan might purchase a greatest-hits or a remixes album -- out of love and loyalty and connoisseurship and the obsessively acquisitive collector's impulse, but with no real expectation of learning anything new. Well, maybe one or two new or previously unreleased tracks to sweeten the pot. On that score, people who buy Homo Americanus (the new Raymond Pettibon monograph out from David Zwirner Books) are in for a particularly excellent treat -- but the real surprise is that even Pettibon's biggest fans are in for a new education, too.--Shana Nys Dambrot "Whitehot Magazine "

In many ways, Raymond Pettibon is a master of black comedy: His poetic imagery seduces you, and then it cracks you over the head.--Shepard Fairey "Playboy "

As the resident artist for Black Flag, [Pettibon] illustrated hordes of their album covers and show flyers, all stamped with the trademark four black bars now so recognizable from endless T-shirts and tattoos. From there, he went on to make four decades' worth of frenetic, macabre, hyper-verbal Pop art illustrations, now gathered in a mammoth career-spanning monograph, Homo Americanus, which accompanies his first major European retrospective, currently at The Deichtorhallen in Hamburg, Germany, and clocks in at nearly 700 pages. As it might sound in the comic books that inspired Pettibon: Thump!--Stephanie Eckardt "W Magazine Online "

Seeing all this ambitious, restlessly self-interrogating work brought together in one place impresses viewers with how diligently Pettibon keeps his grimly witty mastery of word and image from descending into all-out nihilism.--Chris Lehmann "Bookforum "

Provide[s] an overview of the artist's four-decade career with selections from his Black Flag flyers, Xeroxed zines, high-contrast drawings and other paper-based works... A marriage of rough visuals and text.--Joshua Barajas "PBS NewsHour "

If genius means anything anymore--for me it is the union of inexplicably keen insight with an uncanny capacity to say or show what others fail to articulate but everybody knows--then the artist Raymond Pettibon is one, the man of the hour at minutes to midnight on the Doomsday Clock.--Robert Storr "The New York Review of Books "

There are many books out there collecting Raymond Pettibon's work, so let's cut to the chase: Homo Americanus: Collected Works is the best on the market. It's a Platonic ideal of an art monograph, offering a career-spanning selection of his best drawings, each one beautifully reproduced at a large size, with minimum commentary.--Jeff Jackson "Fanzine "


Raymond Pettibon grew up in Hermosa Beach and graduated with a degree in economics from the University of California, Los Angeles, in 1977. Pettibon's work has been exhibited widely throughout the US and abroad. Prominent venues which have held recent solo exhibitions include the MoCA San Diego, La Jolla, California; and the Whitney Museum, New York (both 2005). In 1998, he had his first American museum presentation, organized by The Renaissance Society at the University of Chicago in collaboration with the Philadelphia Museum of Art, which traveled to The Drawing Center, New York, and the MOCA, Los Angeles.

​Ulrich Loock was born in 1953 in Braunschweig, Germany. He was Director of Kunsthalle Bern from 1985-1997, Director of Kunstmuseum Luzern, Lucerne, Switzerland from 1997-2001, and Deputy Director of Museu de Serralves, Porto, Portugal from 2003-2010. He currently lives and works in Berlin as an independent curator, art critic and lecturer. He has curated numerous exhibitions of artists such as Michael Asher, Matthew Barney, Marlene Dumas, Robert Gober, Katharina Grosse, Eberhard Havekost, Maria Lassnig, Sol LeWitt, Brice Marden, Gerhard Richter, Wilhelm Sasnal, Thomas Schütte, Thomas Struth, Luc Tuymans and Christopher Wool. In 1995, he curated a comprehensive show of Raymond Pettibon's work at Kunsthalle Bern, and included the artist's work in the 2006 show The 80s: A Topology at Museu de Serralves.

Lucas Zwirner is Editor at David Zwirner Books and has contributed texts to gallery publications, including On Kawara: Date Painting(s) in New York and 136 Other Cities (2012), Raymond Pettibon: To Wit (2013), and Jason Rhoades: PeaRoeFoam (2015).